For their solo exhibition in Cemeti – Institute for Art and Society (April 9 – May 7, 2021), Gegerboyo (a Yogyakarta-based artist collective of five ahli gambar[1]—Vendy Methodos, Enka Komariah, Dian Suci Rahmawati, Ipeh Nur, and Prihatmoko Moki) offers us an idea: filling up most parts of the main gallery wall with black-and-white drawings. They came up with the idea as a respond to the curatorial concept that attempts to invite new interpretations of the method, approach, technique, and idea behind Gegerboyo’s creative process. Aside from the drawings on the gallery wall, they also hang transparent fabrics of the same size in the gallery, printed with image of a gate (in some fabrics, the printed image is accentuated with a touch of hand-drawing); the fabrics are hung in different positions at a certain distance from the wall. As a result, from certain perspectives, the fabrics might “disrupt”—or rather, enrich—the view of the visitors when looking at the drawings, while invoking a dynamic, immersive impression.

In their creative process, Gegerboyo highlights the act of responding to each member’s drawings. Through this method, they attempt to interpret an approach practiced by tonil, a traditional grassroot theatre (which relies heavily on narrative improvisation outside the script) into the practice of creating an image. In a certain degree, a close look at Gegerboyo’s work might invoke a tone of pewayangan or visual structure in a scene from a play in front of a panoramic background. Of course, this effect does not come from Gegerboyo’s common practice of working with murals, images on the wall, or images in large surfaces. The theatrical tone emerged through the multiplicity of the presence of figures and objects; a complex set of elements filling up the surface.

Yet, the curatorial observed Gegerboyo’s anti-narrative approach in constructing their image. They compose figures and objects with disregard to the chronological aspects. Some figures and objects are drawn first, spread out in separate areas of the wall, and the empty surfaces are slowly filled up in respond to the previous image in that area. In other words, the previous images became a guide to create and arrange the images after them. This order of drawing does not attempt to negate the common system of articulation from A to Z, but it is an important experiment to break out of the rigid division of acts in narrative storytelling. This method is pursued by approaching the possibility of the dialectical relationships between the parts of the image.

The “non-systemic” drawing workflow that has been implemented by Gegerboyo is, in fact, an attempt to go beyond the boundaries of the consecutive system. As we can see in this exhibition, titled Gapura Buwana, the visual tsunami on Gegerboyo’s walls is fragmental instead of sequential—the fragments of the images interrupt one another, resulting in a visual solidity. Likewise, we can also notice the intention of installing the transparent fabrics, which aims to interrupt the visual appearance and first layer of the significance invoked by the images on the wall. This kind of construction shows us how compositional rules regarding the weight of figures and objects, perspective, or the logic of light are deliberately violated in pursuit of a progressive model of arranging a scene. Through the combination between the images on the wall and on the transparent fabric, the spatial and perceptual experience invoked upon facing Gegerboyo’s drawings is a situation that transcends the boundaries of a flat surface.

Gazing through the threshold—an area that both divides and connects two different zones. Apart from the visible images of gates on the transparent fabrics, the composition of Gegerboyo’s works in this exhibition also invites us to listen to the pictures and their contents through an abstract gate. This way of seeing, in particular, is based on a common thread that connects each member’s focus in their individual practice. While Gegerboyo as a group is inspired by Javanese cultural idioms and the actual situation of contemporary urban spaces to interpret social behavior, individually, the members are drawn to different issues, ranging from power relations, historical sites, myths and local narratives, daily routines, to domestification and women issues. The diverse range of issues are dissected through formal exploration, signifying a boundary that connects the material and spiritual world, public and domestic realm, daily routine and extraordinary actions, the past and the present, and between mass media and subjective visual creations.

In this case, in Gegerboyo’s drawings on the wall, we can see a number of key visuals. Among others: objects arranged to resemble a frame; objects that naturally indicate layers (such as curtains and fabrics); natural objects (plants), artificial objects (statues, masks, tombs, chairs), and specific sites (Merapi) which can be considered to have certain cultural and spiritual values; buildings that represent the form of a gate and limasan architecture; wooden construction and building of the vehicle showing scenes of social kinship; famous figures representing class and power or a group of ordinary people forming a ritual formation; human bodies, mythological beasts, and other supernatural bodies (both as a whole and in fragments); as well as modern technological objects. All of them are disguised through an odd arrangement, resulting in a landscape that embody a spectral, yet everyday atmosphere. The odd relationship among these fragments seems to break down the narrative boundaries, thus opening the possibility of wilder interpretation in the heads of the spectator.

Beyond its visibility, an image is also a construction that provides gaps, or “see-through” areas, through which we can explore various contextual shrouds underlying the form of its visual realm. In this regard, Gegerboyo agrees that each artist in the group has their own “gate”; a personal entrance from which each member, as an artist, captures or observes reality to be interpreted into drawings through their own unique style of expression. Thus, the various interpretations are composed on to a surface they work on collectively, whether it is a wall, paper, or fabric. Through these drawings, their “personal gates” interact with each other, forming a “collective gate”. With this perspective, we can understand that their visual work also becomes a gate that enable the spectator to see and capture the scattered hidden meaning that underlies the odd relations among their drawings.

In fact, Gegerboyo also has explored the interpretive framework I explained above through a material experiment, using a transparent fabric in which a picture of a gate is printed on it (as a combined result of each member’s visual interpretation on the form of gate itself). The transparent fabrics hung like curtains, both disrupting and complementing the appearance of the pictures on the wall; but their presence can also act as another gateway that must be passed through by the spectator’s gaze when they attempt to see the pictures behind it. Through this visual experiment, they have materialized the idea of “see-through” into being. In the end, the presence of the dangling transparent fabric in front of the drawings on the wall has the potential to change the viewer’s mode of perception from merely looking at the images in flat surface to experiencing them in spatial volume inhabited by multilayered visual. In the end, Gegerboyo’s images appear cinematically, supported by a structure that plays with the idea of montage. *

[1] ‘Ahli gambar’ (‘drawing expert’ or ‘drawing specialist’) is a term used by cultural actors in Indonesia in the 1930s. This term is mainly attached to an organization called the Persatuan Ahli-ahli Gambar Indonesia or PERSAGI (Association of Indonesia Drawing Specialists).

In the context of Gegerboyo’s drawings, the process of fusion is the ‘sequential drawings’, and the anticipation of ‘illusion...

Where is Gegerboyo’s Visual Production?

We can say that the “physical memory” of the “production process” is being emphasized, and it becomes Gegerboyo’s purpose... 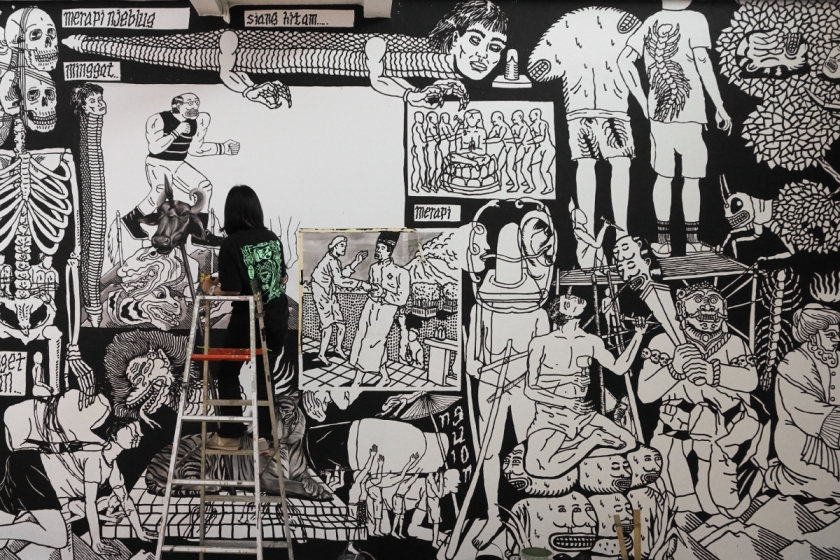 Where are Gegerboyo’s Visual Sketches?

In that context, we can no longer limit sketches to manual, hand-drawn scribbles on a piece of paper. In...

The “non-systemic” drawing workflow that has been implemented by Gegerboyo is, in fact, an attempt to go beyond the...

Gapura Buwana exhibits Gegerboyo's visual artworks, most of which are drawn on the walls of the gallery. The rest...