~IIINNNGGG~ is a solo exhibition by artist Julian Abraham “Togar”. The title is a sound to be made rather than a word to be spoken, it refers to the ringing left in one’s ears after hearing a loud noise or in moments of ‘silence’, as well as to the verb adjective -ing (‘listening’, ‘doing’) in English language. This solo-exhibition builds on the artist’s ongoing research into the physical, technological, historical and socio-political aspects of sound.

In particular, the works in ~IIINNNGGG~ explore the contested nature of sound in a public realm that is both literally and ideologically polyphonic. Starting from an understanding of sound as one of the key contentions between people and communities, Togar sees the battle for the soundscape as highly politicised, particularly in a context such as Indonesia where noise regulation does not exist on a legislative level. Who gets to produce and regulate sound is inevitably connected to power. Who has the power to decide which sound is noise, what can and cannot be voiced, and what are the consequences?

At the core of the exhibition is a new film installation consisting of documentation of Ngaji Bunyi- Does Sound Matter?, a performance lecture by the artist that took place on Sunday, 2 December 2018 at Masjid Jendral Sudirman, a mosque in Yogyakarta that hosts a range of discursive public programmes. In this lecture, Togar explored the immateriality of sound (physics), sound as material (art) and its political implications in daily life. The installation serves as a keystone for other works in the exhibition, which highlight particular areas of concern: from the apparatus of (electronic) sound to sound as a reoccurring point of tension and negotiation between neighbours and communities.

Starting from the research question “Is Sound Matter? Does Sound Matter?”, in October 2018, Togar undertook a research trip to Tanjung Balai in Sumatra, close to his own home town of Medan. In 2016, Tanjung Balai was the site of major riots that developed after a conversation between neighbours about sound vs. noise. Meeting and interviewing people from all sides, Togar found a complex process of social amplification and distortion, and what was initially a neighbourly dispute became an entangled web of interests, politics, economy and power. In this exhibition, Togar explores sound as a lens through which to critique dominant social and political systems, understand the myriad powers that occupy public space, how we can speak to (bodies of) power, and how we might possibly resist the current tolerance of intolerance by understanding the power of sound, both as a medium and an issue.

This exhibition is part of Bodies of Power/Power for Bodies, Cemeti’s ongoing programming thread that explores the social role and political agency of cultural practice; how we can speak to (bodies) of power, as well as directly support our individual and collective bodies.

Bodies of Power/Power for Bodies was a platform to support and publicly reflect on the practice of artists, collectives,... 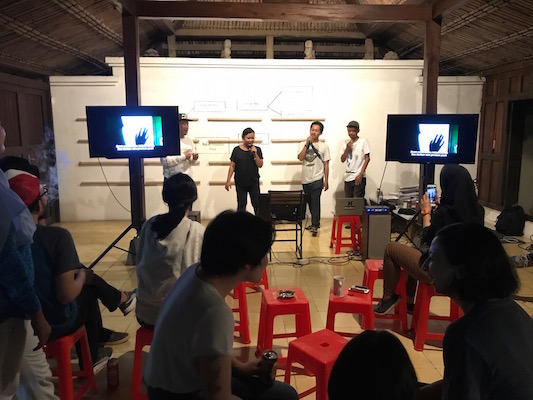 Screening of documentation of the theatre piece Sangkar Madu (2013), by Verry Handayani, followed by a discussion about the...

Artist Julia Sarisetiati will give a guided tour of the exhibition in which she will tell you more about...

Choreographed Knowledges is a project by artist Julia Sarisetiati, curated by Grace Samboh, building on the artist’s long-term research...

In this event, which also marks the final day of the exhibition, researcher M. Yaser Arafat will share his...

Come and celebrate the New Year with us this Saturday at 4pm with an Artist Talk by artist Julian...