Launching Programs, Group Exhibitions, and a Series of Public Activities

Bodies of Power/Power for Bodies is a group exhibition and events program at Cemeti-Institute for Art and Society. It marked the start of a new program thread (of the same name) that at Cemeti included a range of public programmes and research activities. This first exhibition brings together artists and collectives from Indonesia who either work directly with communities through DIY civic action, or use the space of art to critique dominant social and political systems. Through these practices, as well as those of various community initiatives involved in the associated public programmes, we hope to explore the social role and political agency of cultural practice; how we can speak to (bodies of) power, as well as directly support our individual and collective bodies.

The works in this exhibition contain a wide variety of artistic languages, methods and ways of working. Some of the artists will present and activate ongoing collaborations with specific communities. For example, Arahmaiani & Tritura and a group of young people from Yogyakarta staged a performance and parade on the day of the opening, starting at a local public square and leading back to Cemeti. This work evolved out of a long-term collaboration with various youngsters in danger of becoming involved in youth violence, and used a combination of traditional and popular culture to facilitate critical self-understanding. Anang Saptoto presented a series of banners, opened a shop and organised a workshop series with the aim to support communities he has been working with that are under threat of eviction. Serrum and Kelompok Kurator Kampung have been working with informal communities in the north of Jakarta, developing alternatives to existing education systems and public spaces in the area. In this exhibition, they presented a documentary film that follows the life of a local becak (traditional pedal taxi) driver.

Other artists critically reflected on different political issues through multisensory, humourous or interactive artworks. In her video work Safeguarding the Curry Burger, Elia Nurvista explores the role of the state in constructing an “authentic” national identity and sense of ownership through food and recipes. Julian Abraham “Togar” has developed alternative products and a multi-part sound installation that reflect on the institutionalization of religion. M.N.Qomaruddin and Performer Studio Teater Garasi presented their research on cultural myths in relation to social history and theater practice by means of a video work, culminating in an interactive public performance at Cemeti. HONF Collective created an installation and hold workshops speculating on more radical bio-futures. Artist collective Kerjasama 59 made both a mural in Cemeti’s gallery and a stock image database of drawings that can be used by communities facing issues connecting to land rights and relocation on banners and campaign materials; access to which will be spread around the city through a series of workshops. Lifepatch – citizen initiative in art, science and technology opened a traditional healing clinic in Cemeti’s kitchen and gardens, reflecting on the overlaps between belief and scientific knowledge.

As part of the artists’ contributions, there were workshops, performances and events at Cemeti and around the city. In addition, there was a two-day symposium entitled IS IT WORKING?* *Whose TERMS? On what CONDITIONS? How does it APPLY?, co-curated with Jogja based collective Hyphen (Grace Samboh and Ratna Mufida) and assistant curator Khairunnisa, that brought together various self-organised communities with academics, researchers, artists and curators to collectively reflect on the working conditions of various forms of social practice. A film program curated by researcher Fiky Daulay mapped issues of land rights, identity and belief. And a resource room, brought together by assistant curator Khairunnisa, included interviews with community initiatives that were part of the symposium, as well as materials offering a more indepth view into the artist practices shown and the key issues at stake in their works.

More broadly, Bodies of Power/Power for Bodies evolved out of questions raised during Maintenance Works, our previous long-term programme. In particular, it was developed to create a platform to support and publically reflect on the praxis of artists and groups who are deeply invested in rethinking the civic role of art. As these artist works are often centered outside of a gallery context and located within specific communities, we wanted to ask how we might connect with the communities these projects are engaged with. To see what possibilities they offer for changing the role of the institution itself to become a site of civic action. With this year marking the launch of campaigns for a key presidential election taking place in 2019 as well as the 20-year anniversary of Reformasi, the process of democratisation initiated after the fall of the Suharto regime, we feel it is a crucial moment to think together about the possibilities for grassroots community and social action and the potential for socially and politically transformative practice.

This group exhibition is part of the new program thread Bodies of Power/Power for Bodies.

Series of Public Events (part of the exhibition):

Nusantara Flag Project
a performance and parade by Arahmaiana, Tritura and young people

IS IT WORKING?*
On whose TERMS? Under what CONDITIONS? How are these APPLIED?
a two-day symposium curated by Cemeti and Hyphen

The Nomad
a talk by artist Arahmaiani

Please download the PDF version of the Bodies of Power / Bodies for Bodies exhibition guide here. 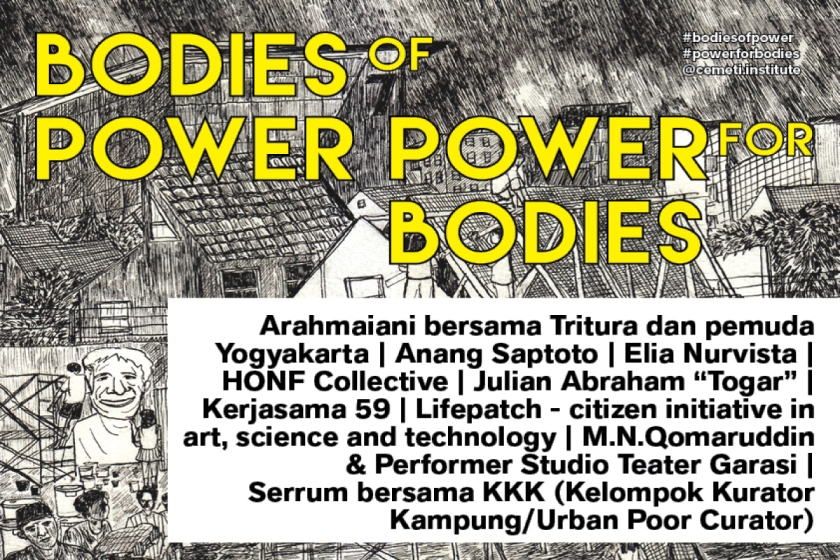 Bodies of Power/Power for Bodies was a platform to support and publicly reflect on the practice of artists, collectives,...

Screening of documentation of the theatre piece Sangkar Madu (2013), by Verry Handayani, followed by a discussion about the...

Artist Julia Sarisetiati will give a guided tour of the exhibition in which she will tell you more about...

Choreographed Knowledges is a project by artist Julia Sarisetiati, curated by Grace Samboh, building on the artist’s long-term research... 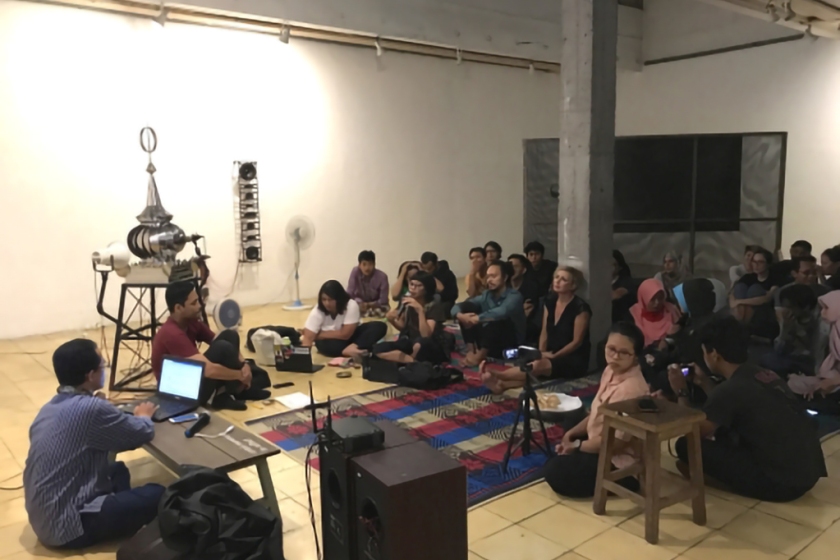 In this event, which also marks the final day of the exhibition, researcher M. Yaser Arafat will share his...

Come and celebrate the New Year with us this Saturday at 4pm with an Artist Talk by artist Julian...