Cemeti – Institute for Art and Society’s residency programme brings artists from both Indonesia and abroad to connect with local issues and communities in Yogyakarta. The aim is to create connectivity between artistic and civic action through an open process of research and knowledge exchange, supporting artists to explore the social landscape of the city over three months. By directly connecting residents to its networks, Cemeti’s residency programme encourages collaborative working with local individuals, cultural groups and citizen initiatives.

From March to May 2018, Cemeti hosted three artists from Indonesia, the Netherlands, and New Zealand. This residency program is organized by Cemeti – Institute for Art and Society and supported by the Mondriaan Fund, the Asia New Zealand Foundation, and Unisadhuguna International College, Jakarta.

This question is the basic premise of the research Ardi Gunawan has been conducting during his residency period at Cemeti. This project starts from his attention in gentrification, an issue that is occur in cities such as Jakarta and Yogyakarta, where the paradigm of strategic location has changed the economics of the region and the production of living space that is becoming more narrow and dense. During his residency, Ardi observed various forms of modern and contemporary architecture of the residential area created by the real estate developers. In search of a connection between the social notion of Modernist architecture and the financial speculation of the developers, Ardi found a comic book created by Heath Robinson and Browne in 1937 entitled ‘How to live in a flat’. The comic is a satirical response to the changing domestic trends of that period; the arrival of European Modernism in the UK amidst the development of a financially stable British middle class. Inspired by the comic’s humorous and satirical sketches, Ardi tries to contextualize it into his work by developing his own comedic design for a residential house to be built on the land he will obtained with the IDR 11,500,000 production budget at his disposal.

During her residency period, Bridget Reweti has focussed on finding connections between her own context and Jogja; by making new friends and by means of two artistic exercises, firstly by swimming an influential character from Maori’s past (and present) into remembrance and secondly by introducing two powerful mountains to each other–mountains who may or may not have met before.

The first exercise centres around Tupaia (1725-1770), an arioi high priest from Tahiti. A skilled navigator and diplomat, able to converse in Maori, Tupaia joined captain Cook’s voyage across the Pacific. Remembered in different ways across a multitude of Pacific communities, Tupaia’s position is regarded as influential in this history. Tupaia died in Batavia, the city now known as Jakarta, and laid to rest in an unmarked grave on Pulau Damar Besar, an island just off the coast of Java. As a way to acknowledge Tupaia’s death, Bridget decided to swim a circle around the island, putting her body in the water that flows between Tupaia’s burial ground and the lands that connect Tupaia and Bridget, Indonesia and Aotearoa, past and present.

A second exercise was a walk of Mount Merapi, one of the world’s most active volcanoes located one hour’s drive north of Yogyakarta. Merapi’s powerful presence, both physically in its seismic activity and fertility, and within people’s minds as an entity that provides livelihoods and takes them away, connects it to Mauao, a mountain in Bridget’s hometown of Tauranga who is considered to be a Maori ancestor. For this presentation, these exercises and on-going conversations will temporarily be suspended for a Jogja audience, whilst time and space continue to collapse into the entangled, muddled realities of everyday life.

Coco Duivenvoorde has an ongoing interest in food and cooking as a language to discuss social issues in various contexts. During the residency period at Cemeti, Coco has been researching the ingredients, practices and social contexts of the traditional Indonesian drink Jamu. Jamu is an herbal drink made from natural ingredients that is used as a remedy for ailments ranging from cosmetic, to sexual performance, to serious medical conditions. The culture of Jamu drinking is a daily practice, meant to sustain the good health of the body and spirit.

Coco began by learning how to make Jamu as well as visiting a range of Jamu sellers around Jogja. She then spent time with the community in the Jamu producing Desa (district) of Kiringan and met with academics specialising in the economic, social and cultural aspects of Jamu. Building on this research she will organise a series of workshops connecting the different individuals and communities she met. Through various methods of storytelling, as well as practical actions, these workshops will collect, preserve and further distribute (embodied) knowledge and question the social infrastructural contexts of Jamu.

Ardi Gunawan is a multi-disciplinary artist and teacher. He studied visual art at Monash University in Melbourne, Australia. Throughout his practice, he develops projects that are process-driven/performative and exhibits sculptural and architectural works that are explored through a series of rehearsals of scores, tasks, and a list of actions. He has exhibited nationally and internationally. He lives and works in Jakarta, Indonesia. He lectures in Visual Communication Design and Contextual Studies at Unisadhuguna International College, Jakarta.

Bridget Reweti is an artist from Ng%u0101ti Ranginui and Ng%u0101i Te Rangi in Aotearoa New Zealand. Her lens-based practice explores landscape perspectives and contemporary Indigenous realities. Currently based in Wellington, Reweti holds a Masters in M%u0101ori Visual Arts, (First Class Honours) through Massey University, and a PGDip in Museum and Heritage Studies from Victoria University. She is also an active member of Kava Club, a Wellington-based collective of M%u0101ori and Pacific artists and Mata Aho Collective, a collaboration between four M%u0101ori women artists who produce large-scale textile works.

Coco Duivenvoorde is an artist from Amsterdam, the Netherlands. Her practice, which is often collaborative in nature, aims to address sociopolitical issues such as feminism, the politics of food, colonial narratives and racism; whilst exploring (moving) images, poetry and performance as a visual language. She is part of the We Are Here Cooperative (Amsterdam), a platform where refugees in limbo and professional cultural producers collaborate on cultural projects. She graduated from the Dutch Art Institute, MA Fine Art (Arnhem, the Netherlands) in 2015. 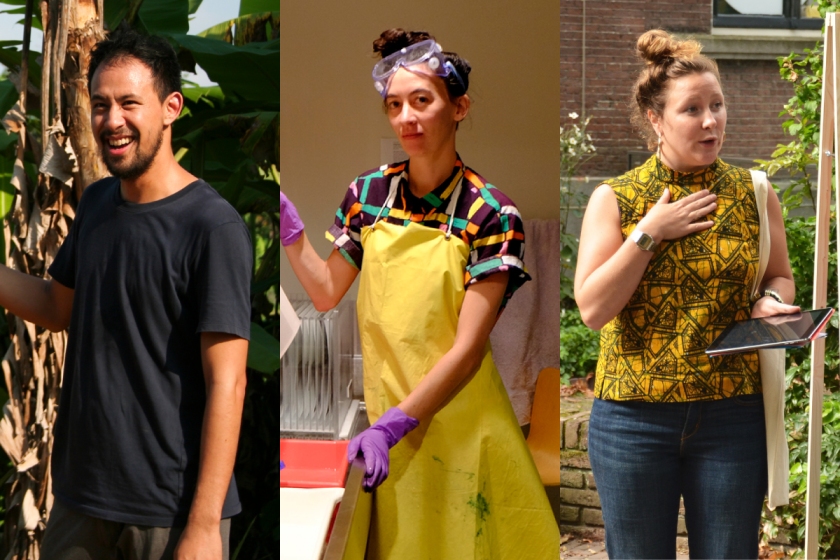 From March to May 2018, Cemeti hosted three artists from Indonesia, the Netherlands, and New Zealand. This residency program...