a project by Dito Yuwono;

Series of Activities by the Collective:

The First Political Space Called Home is a project initiated by artist Dito Yuwono for which he has invited five Yogyakarta based collectives to collaborate, namely Barasub, Laras, RAR Editions, Sewon Screening and Studio Batu. The exhibition consists of new works by Yuwono in which he explores his own as well as Cemeti’s spatial histories, setting the context for the overall project; and a series of two or three-day solo presentations and events by the invited collectives.

The project takes as its starting point a reading of domestic space as the first site of political encounter. A physical space that holds the institution of family, a form of worlding that is a microcosm of the way we organise on societal level. It is the first place a person experiences role divisions, hierachies and power structures, space constraints, conflicts of interest and resource management. Many contemporary art spaces in Indonesia began or are still being run in private dwellings, blurring the lines between public and private space. One of the first spaces to employ this model was Cemeti itself. Cemeti started in 1988 in the home of its founders, Mella Jaarsma and Nindityo Adipurnomo on Jl. Ngadisuryan (located in the are of the kraton, the Sultan’s Palace). Their front room acted as a space to support artists, display work and exchange ideas. This was much needed during the Suharto regime, when there was little to no infrastructure for contemporary art. In 1991, Jaarsma and Adipurnomo started renting a seperate private home, using Jl. Ngadisuryan as a gallery space.

Departing from a curiosity in spatial historical narratives and the overlapping of public and private domains, Dito Yuwono explored Cemeti’s history by means of archival research, interviews and a performative tour. Last August, Yuwono organised Tur Pertama Rumah Pertama (“The First Tour of the First Home”), a tour of Cemeti’s first house (1988-1999), which is currently for rent. Here, Yuwono shared his findings with the collectives invited to participate in the project by means of a performative lecture in which he traced Cemeti’s narrative and spatial histories, whilst orchestrating the phenomenological experience of being inside this stories-filled house. The tour offered a starting point for each collective to develop their own 2 or 3 day project at Cemeti, intervening, questioning and rewriting historical narratives through a diverse range practices including comic book making and drawing, music research, design and publishing, film screening and theatrical performance.

For the exhibition at Cemeti, Dito Yuwono’s works will be displayed in in-between spaces around Cemeti’s building. This will include usually unaccessible sites such as the storage, as well as locations not usually used for exhibitions such as the garden, hallway and stockroom. The domestic spaces of the institution. At the same time, Cemeti’s gallery space will host each of the five collectives for 2 or 3 days each. During this time, the gallery will serve as temporary home and studio space (Barasub), a fanzine printing workshop (RAR Editions), a place where the outside soundscape of the neighbourhood is brought in (Laras), a temporary cinema (Sewon Screening) and a rehearsal and performance space (Studio Batu). The project will culminate in an online publication, which will record the project’s working process, research findings and documentation; expanding the life of the project beyond the duration of the exhibition and creating a platform to make public what usually remains unseen.

Dito Yuwono works in various media, from photography to mix-media installation to video and performance. He is interested in working with communities and recollecting memories to find a link between memory-citizen-history. His work often entails storytelling, using a personal approach to subtly grasp the bigger picture of socio-political environments. Recent exhibitions and projects include: “The Memories of Unidentified Experience” (KKF, Yogyakarta, 2014), “Recollecting Memories: Tukang Foto Keliling” (Kaliurang, 2013; Ruangrupa, Jakarta, 2015), “Geography of Here and There” (NCCA Darwin, 2016), “Collective (im)Possibilities: The Politics of Too Many Dinner Parties”, (Project Goleb, Amsterdam, 2017). Dito is the co-founder and co-curator of Lir Space in Yogyakarta and member of Mes56 Artist Collective. Dito works and lives in Yogyakarta.

In their performance project Membayang, the interdisciplinary collective Studio Batu attempts to explore the history of “raising Cemeti”, particularly... 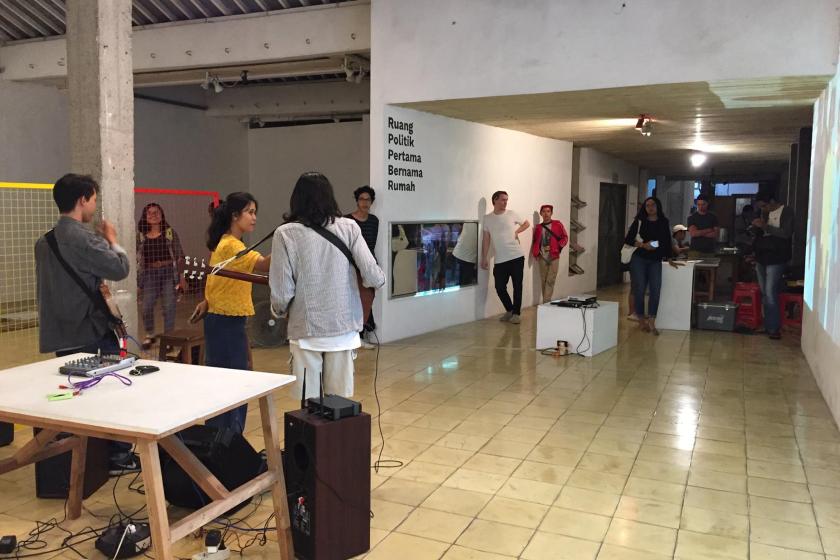 The three-day project Jalan Memutar by design and publishing collective RAR Editions starts from the idea that archiving is... 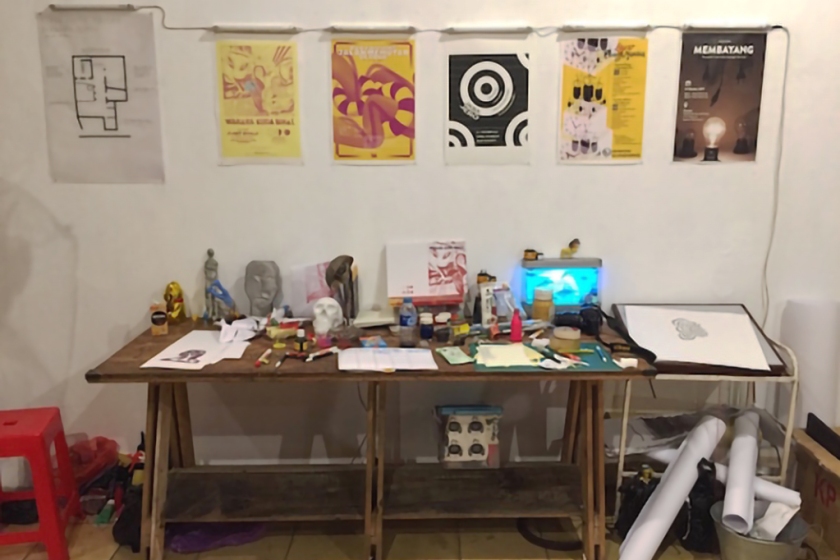 Barasub will organise a 24 hour performance at Cemeti entitled Wahana Kuda Binal. For one night and one day,... 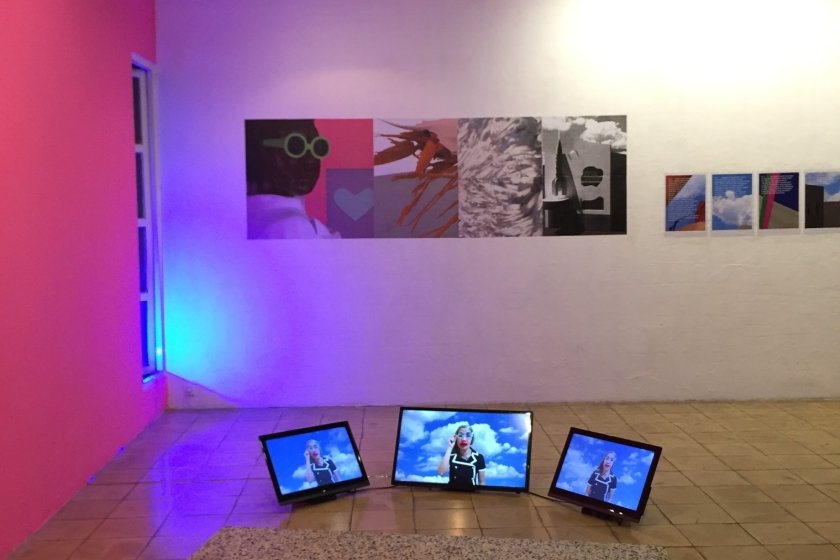 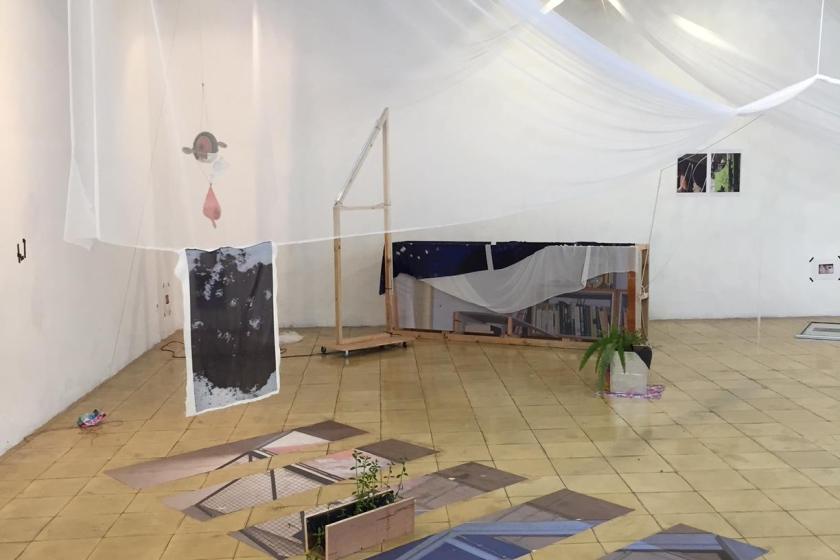 In a Hard Place Apply Soft Pressure/s is a project developed by soft/WALL/studs (s/W/s), a blend of studio, library...

Artist Job Fair is a project by Wok The Rock, with spatial design by architect collective Videshiiya. For the...

Museum of the Ordinary Things

The Museum of the Ordinary Things raises questions about which forms of knowledge get preserved and historicised, and about...